Brazil’s new president is an opponent of globalism, not a puppet 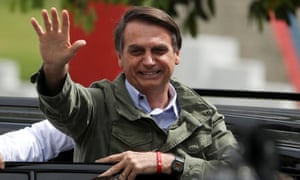 He was never going to be the kind of man the oligarchy could promote: homophobic; misogynist; racist; nationalist; eco-sceptic and, worst of all, white; Christian and heterosexual –  Brazil’s new president Jair Bolsonaro is anything but cool! Reaction with a capital ‘R’ has come to Brazil. How did this happen and what does the future hold?

When leftists were jumping up and down supporting elite-funded regime change protests in 2013, I warned what would happen: regime change would open the door to further globalist penetration. But the Empire had banked more on a Brazilian Obama such as elite-trained former Supreme Court Justice Joaquim Barbosa or Marina Silva.

The key concern for global elites in Brazil was the attempt to internationalise the Amazon rainforest, wresting sovereignty from the Brazilian government to international NGOs under UN control such as the elite World Wildlife Fund.

Brazil’s increasing military cooperation with Russia and its dependence on China were also key geopolitical factors driving US interference in the country.

However, lacking from my previous analysis of the country were some key facts. Under Brazil’s military dictatorship from 1962- 1984, the country’s economy grew by over 10 % per annum, in what is referred to as Brazil’s economic miracle. Massive infrastructural projects were undertaken, modernising a backward country. But industrialisation and urbanisation led to an increase in class struggle as the minimum wage and purchasing power declined, while a super wealthy comprador bourgeoisie reaped most of the benefits. The economic progress was also accompanied by a brutal class war with thousands of opponents murdered!

Globalist interests, operating under the mantle of ‘environmentalism’ were also a problem for the military regime. The Belo Monte Dam was opposed by environmentalist groups, greatly stagnating the economic and cultural progress of the country. During the Cold War Washington backed military regimes in Latin America in order to protect US corporate interests from democratic reforms in favour of the poor. But nationalist regimes proved less propitious to imperialist interests than liberal democracy. In order to solve the problem, US elites formed the National Endowment for Democracy in 1983, a government foundation which uses soft power to overthrow foreign governments hostile to US interests.

There is significant evidence the US helped end Latin American and Asian dictatorships with well-funded psychological operations referred to as ‘people power’.

Why Bolsonaro is bad

We will not comment on the crimes of the military regime here. Bolsonaro defends torture and mass murder. He has even advocated a return to military rule and civil war. It must be admitted, nonetheless, that the country is already in a state of civil war. Violent crime in Brazil is among the highest in the world, with drugs and gangland warfare proliferating at an alarming rate. Bolsonaro has advocated arming Brazilian citizens. It may be a wise move. It would also protect law-abiding citizens from police corruption. The right to bear arms is fundamental to the prevention of tyranny. It is not just a feature of authoritarian right-wing regimes. In Enver Hoxha’s socialist Albania and Muammar Gaddafi’s Libya, the masses had access to firearms, in what were, to differing degrees, mass states.

Bolsonaro has criticised the LGBTQ movement for promoting sexual deviance among young children in schools. That is the nature of his homophobia and it is a very good thing! No country can have a future if its children’s minds are polluted by pseudoscience and sexual abuse. On such as fundamental issue, the new Brazilian president will find favour in Moscow and Beijing. President Putin has warned the world of the Satanism practised by Western elites. One only needs to pay attention to the mainstream press, with senior politicians arrested for paedophilia and others attempting to legalise sex with children to realise the gravity of the problem.

None of this has ever been criticised by so-called ‘Marxists’.  When I wrote a series on LGBT in 2016, intellectuals linked France’s left populists ‘La France Insoumise’ told me it was the first time they had ever read a Marxist critique of bourgeois sexuality. It seems my labour was not in vain. Senior leftist politicians are now saying the same thing.

Many fear Bolsonaro will shift the country’s BRICS orientation towards Washington. But that shift already occurred under former President Michel Temer. Washington elites want to see a return of leaders similar in outlook to former president Fernando Henrique Cardoso who sold the country out to globalist interests and drove up public debt. Cardoso even opposed Brazil’s attempt to gain a seat at the United Nations, so as not upset Washington. Bolsonaro has said Cardoso should be shot!

Bolsonaro is unlikely to make Brazil a puppet of Washington elites. Rather, he will attempt to restore law and order, decrease the national deficit, increase industrial production and exports and form more bilateral relations. The rise of Bolsarano is, in fact, the rise of geopolitical multipolarity.

The new Brazilian president will bring hope to indigenous peoples by opening mines and building dams on reservation lands. Liberals assume indigenous peoples want to remain poor and primitive. That is the fantasy promoted by rich Hollywood elites. Nothing could be further from the truth. Indigenous people want progress, electricity, infrastructure and civilisation. As I pointed out in previous articles, ecological and indigenous rights NGOs funded by global elites have hampered the country’s development for decades. Bolsonaro understands that they are enemies of the Brazilian people and he is likely to crack down on their activities. This is also welcome news.

Although he has decided to remain in the Paris Climate Accord, Bolsonaro has praised President Trump’s decision to pull out. If Brazil follows suit, it will collapse the global warming agenda, bankrupting the most noxious elements of global finance capitalism.

Many pundits have pointed out that Bolsonaro is advised by Chicago School economists who promote neoliberalism. That is true. But they fail to realise that the Brazilian president favour government control over the commanding heights of the economy and strategic resources.  Bolsarano’s privatisation programmes may favour the national bourgeoisie.

Bolsarano is said to be close to Brazil’s agricultural industry. He wants to increase the production of beef and merge environmental and agricultural departments. Many see that as a rejection of the global warming agenda. Brazil is poised to become the world’s number one producer of meat. The new Brazilian President is likely to come into conflict with the UN on this issue.

The very elites promoting climate change pseudoscience, sexual perversion and primitivism are now pushing a vegan agenda at the UN. Anthropogenic climate change is being invoked as an excuse to discourage the consumption of meat.

Globalist elites are also pushing the idea that human beings are mere animals, that animals should be considered persons with rights and it is, therefore, cruel to kill them for meat.

Dr Natasha Cambell Mcbride has warned that veganism can lead to serious mental disorder. Progressivists are predicting that meat will be banned in future. Abortions will be legal and even encouraged but animal killers might end up in jail!

The promotion of veganism is part of a general tendency towards naturalism and what I have referred to as geolatry or earth worship; something which lies at the heart of the global warming agenda, where pantheism, humanism and naturalism replace Christian theology. It is an agenda which has the full support of the Luciferian cult currently running the Vatican. Pope Francis’ latest encyclical ‘Laudati Si’ is a clear expression of the Holy See’s ‘ecological turn’.

As with most populists, Bolsonaro is crude, vulgar and unpredictable. Like Donald Trump, he is champion of Israel and Israeli Prime Minister Benjamin Netanyahu is said to be attending his inauguration. Bolsonaro’s evangelical Christianity is clearly, like its American counterpart, under the pernicious spell of Judaism.  The growth of Christian Zionism in Brazil is certainly worrying, but Brazil’s traditional Catholic and staunchly anti-Zionist resistance to the emerging, global order, is among the world’s strongest.

If I were Bolsonaro’s advisor, I would suggest he attempt to find common ground with Venezuela’s left-populist leader Nicolas Maduro. Venezuela is also threatened by international NGOs, who are using the agenda of indigenous rights to grab mineral-rich land. Both countries, in different ways, opposed by globalist elites. However, Maduro needs to understand that global warming and pseudo-ecological agenda is one of the great threats facing the working class. He also needs to understand that gender confusion is bourgeois decadence, not popular democracy!

If Bolsonaro really wants to go fascist, I would strongly suggest he look into the Mondragon Corporation system in Spain, a system of worker cooperatives set up 1956 under the Franco dictatorship. The cooperatives are a successful example of Catholic social doctrine at work and offer the possibility of an alternative to laissez-faire capitalism.

Bolsonaro has criticised bien–pensance about minority rights. He says minorities should respect the rights of majorities. He’s right! There is nothing oligarchs love more than the rights of minorities!

Brazil’s relationship with China, its biggest trading partner is likely to continue. The completion of China’s trans-continental railway linking Brazil to the Pacific Ocean will transform trade in South America.  But it is also likely that Trumpist America will gain strategic and economic advantages from Boslarano’s election – provided Trump remains in power.

To conclude, Bolsonaro, like Trump, represents the return of the reality principle in a century where the political and class interests and contradictions of the previous century are articulated in new and often incoherent forms. We have reason to be cautiously optimistic.

Gearóid Ó Colmáin is an Irish journalist and political analyst based in Paris. His work focuses on globalisation, geopolitics and class struggle.
Previous Gearóid Ó Colmáin on Syrian Peace Talks in Istanbul
Next Turkey and Venezuela: A New Geopolitical Alliance