Catalan ‘independence’ – A Tool of Capital Against Labour 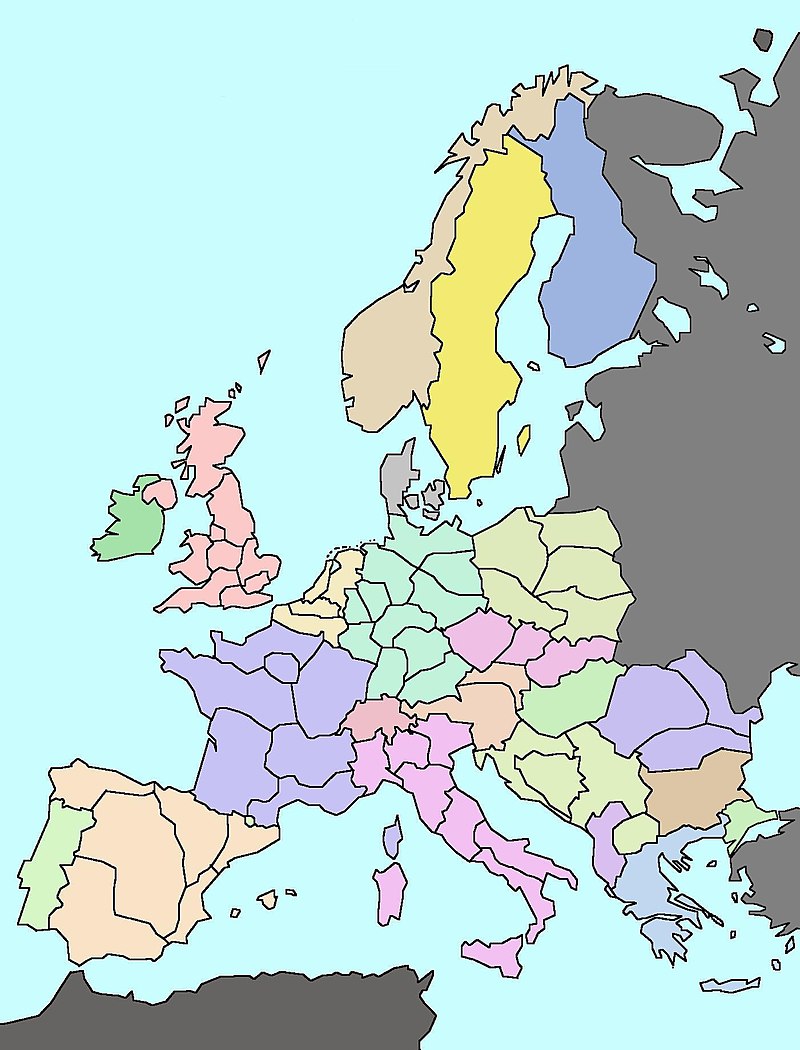 Spain’s rich Catalan region has erupted in violence. After a much-disputed referendum on independence where less than 40 percent of the Spanish region’s inhabitants voted, Catalan’s local government has said it will declare independence this week. Many on the left support Catalan independence. In fact, they claim that those who oppose it  are Francoists and fascists.

Communists understand fascism to be rule by the dictatorship of  financial oligarchy and it is in such a context that one must view events in Spain in terms of the class alliances behind the independence movement. In order to see whether the Catalan independence movement represents the interests of  labour or capital, we need to place Catalan nationalism in the context of  capitalism’s global power configuration.

In 1992 billionaire and EU activist Freddy Heineken designed a map of a federal Europe. The new map proposed dividing European states up into 75 regions or state-lets under the central control of a European federal government.

The idea came from economist and philosopher Leopold Kohr who taught at the London School of Economics. Kohr advocated a form of anarcho-capitalism. He believed that the smaller the polity, the more democratic its institutions. Kohr proposed a return to Europe’s medieval micro-states as the best way of creating a supranational European federation.

Kohr’s ideas have become extremely influential in European Union policy circles. Trans-national financial elites want to make the European Union into the political representation of their power.A federal Europe of micro-states whose policies are determined by global elites would make it impossible for Europe’s citizens to unite against the trans-national  financial ruling class; it is the reason why Heineken’s map is now becoming a  grim reality – all over Europe.

Anarcho-capitalism is precisely what global financiers such as George Soros are promoting. It is hardly surprising, therefore, to find Soros funding behind Catalonia’s independence movement.

According to La Vanguardia, Soros has also been financing anti-Euroscepticism and anti-xenophobia marches in Barcelona since 2014. It is ironic  to hear Catalan anti-racist ‘independistas’ justifying their separation from Spain with the argument that they constitute a separate ‘ethnicity’, given their paymaster’s support for mass immigration and multiculturalism.

Leopold’s vision of a ‘small-is-beautiful’ form of local democracy is attractive on the surface ; but not when one considers that the break-up of the nation-state is part of the European Union’s long term policy of regionalisation: dividing European nations into regions of a highly centralised, technocratic, European super-state under the control of  oligarchs like George Soros.

The state and the people

Like all nation-states, Spain is a political and historical construction. During the Franco dictatorship, Spanish regional autonomy movements were repressed. While Franco’s rebellion was supported by British and American imperialism during the Spanish Civil War, the dictator’s corporatist, traditionalist, Catholic authoritarianism soon became an obstacle to the libertarian, petty bourgeois leftist values required to make neoliberal capitalism under EU dictatorship appear attractive to the masses.

By the late 60s the United States was backing petty bourgeois leftist movements all over the world from the 1968 ‘revolution’ in Paris to the Carnation Revolution in Portugal- the world’s first colour revolution. Protesters in Lisbonne used carnation flowers to woo soldiers to their side. The technique would become a text book methodology for agencies of US imperialism seeking to overthrow governments hostile to their geostrategic or economic interests.

Globalist elites understood that capitalism in crisis could only survive the threat of scientific socialism though permanent revolution and the new catechism of human rights and democracy- categories of bourgeois liberal thought. Thus, the world’s first colour revolution was seen in 1975 in Portugal.

Marxist theorist Nicoas Poulantzas correctly pointed out that the conflict in Portugal was between the old comprador, colonialist bourgeoisie and an emerging domestic bourgeoisie who allied with the working class to bring down the Salazar regime. But it was a configuration of class forces which collapsed the Portuguese Empire in favour of US imperialism. Workers in the Portuguese Empire had become mere tools of inter-imperialist rivalry.

By breaking up the protectionist, corporatist Portuguese Empire, US capitalism had access to new markets. Shortly after the Carnation Revolution, the US was funding a full scale civil war in Portugal’s former colony Angola. It took the intervention of 20,000 Cuban troops in 1975 to save Angola from US neo-colonialism.

To come back to Spain, the US was therefore not too concerned about the dangers of the ‘democratic transition’ in post-Franco Spain. Francoist and Salazarist fascism had been useful to US imperialism in the 1930s when the astounding success of the USSR’s proletarian democracy and scientifically-planned economy threatened to end class domination in the world. But the ‘Soviet threat’ was neutralized by the Khrushchevite revisionists of the late 1950s and the process of anti-stalinisation. Irish communist Neil Gould correctly described the Khrushchevite era as a full-scale counter-revolution.

The 1978 Spanish constitution gave many of Spain’s regions the status of nationality. Over the years, regional nationalist movements have grown in Spain – in Catalonia in particular.

With unemployment levels reaching 50 percent among Spain’s youth and the national debt now exceeding 100 percent of GDP, Spain is a nation-state on the brink of collapse. Catalonia accounts for 2o percent of Spain’s economy, and 25 percent of Spanish exports. The Spanish nation-state cannot continue at its current levels of debt and unemployment. If financial  oligarchs don’t divide the country, there is a serious danger of social revolt.

Until now, public anger has been contained by fake social movements such as the Soros-financed Podemos. The function of ‘podemos’ is to harness public anger over the effects of capitalism while diverting attention from their causes, thus ensuring the perpetuation of the bourgeois class rule. Instead of calling for the dictatorship of the proletariat, Podemos hold up vacuous placards that say ‘cambiar las cosas- change things’. So there you have it, the radical revolutionary programme for socialist political economy in the 21st century is ‘change things!’

There are thousands of people demonstrating on the streets of Barcelona. Trotskyists are in revolutionary paroxysms as workers strike and threaten to bring down the ‘Spanish regime’. The ‘revolution’ is, they enthuse, acquiring more and more of a ‘working-class character’.

During the Spanish Civil War the Soviet Union supported the legitimate Republican government of Spain against Franco’s fascist rebels. The USSR took thousands of Spanish children into its care and supplied the Spanish republicans with weapons and heavy armor. A fascist victory was eventually secured through the ultra-leftist actions of the Trotskyists and anarchists who refused to join the popular front in support of the Republic against fascist reaction.

Instead, the Trotskyists sabotaged and attacked the popular movement, masking their reaction in revolutionary slogans about the ‘rising up of the workers’. George Orwell was among the Trotskyist  spies sent to Catalonia by British intelligence  to inform on the communists. He would subsequently make a career out of spreading lies and disinformation about Stalin and the USSR, writing for publications financed by the CIA.

The ‘left’ are playing the same role today by supporting imperialism’s Catalan independence agenda.  Venezuela’s president Nicolas Maduro has shown once again that he is has a poor understanding of class struggle  and globalisation by joining the chorus of condemnation for the Spanish state’s legitimate repression of the illegal separatist movement.

We are not for a moment suggesting that the Spanish government is anti-imperialist. If fact, they may even be collaborating with the separatists. After all, both sides represent the same class interests, nor do we condone police brutality. But no genuine communist could support a movement piloted by reaction, designed to divide the working class and serve the interests of imperialism. There is a strong possibility that US agencies of regime change such as the Centre for Applied Non-Violent Actions and Strategies (CANVAS) may be on the ground in Catalonia training activists for globalisation’s next ‘revolution’.

Supporters of the separatists say rich Catalonia is being oppressed by Spain. Since when are the rich oppressed by the poor?

Now, Soros and co want to ‘change things’ a little more. It is time to divide the Spanish proletariat by turning Spain’s nationalities into fake ‘nations’ fully under the control of a corporate European super-state. After Catalonia, more will follow. The European Union is quietly watching as Spain is torn apart.Europe will go through a period of crisis and chaos. It is a necessary step towards the messianic ordo ab chao to come.

Gearóid Ó Colmáin is an Irish journalist and political analyst based in Paris. His work focuses on globalisation, geopolitics and class struggle.
Previous China and Russia Urge Diplomatic and Media objectivity in Myanmar
Next Israel Will Be Our Bank